Marshall Bruce Mathers III also known as Eminem was born October 17, 1972 in Missuori. He is an American rapper, record producer, actor, record executive, film producer, songwriter and also known as one of the most controversial and best-selling artists of the early 21st century. He is arguably one of the greatest and influential rapper of all time. He released The Slim Shady LP in 1999 and it went multi-platinum. Eminem achieved two Grammy Awards and four MTV Video Music Awards.

In 2000, Eminem released his third studio album, The Marshall Mathers LP. That album was also noted as fastest-selling album in rap history. Eminem also released his seventh studio album and also Grammy-winning album Recovery in 2010. In that album, he talked about his struggles with addiction and experience with rehabilitation.

Marshall Bruce Mathers III a.k.a. Eminem was born on October, 1972 in St. Joseph Missouri. Eminem never knew his father because his father abandoned him and his mother when he was still an infant. Eminem has tried to get in touch with his father. He sent him letters but he just received the letters back.

Eminem was raised by his mother, Deborah Mathers. He had never managed to keep a job for more than a few months, so they moved frequently between Missouri and Detroit, Michigan, spending a lot of time in public housing projects. Eminem had tough life in Detroit, but managed to get through it.

"I would change schools two, three times a year," Eminem later recalled. "That was probably the roughest part about it all."

This kind of lifestyle left a big impact on his personality. He didn't have close friends and was treated like an exile at each new school. "Beat up in the bathroom, beat up in the hallways, shoved into the lockers," he recalls.

Eminem failed in ninth grade three times, before dropping out of school at the age of 17. Even though he failed, he said he was always good at English. It's proven because he could rhyme better than anyone. He uses language as a tool to incite emotions in a way that nobody has ever matched. He was also named the King of Hip Hop because of it.

At that time, hip-hop was dominated by African-American, which gave great disadvantage. Despite his skin colour, Eminem gained a lot of respects in numerous rap battles in Detroit, which eventually led to his discovery by Dr. Dre.

"Never take ecstasy, beer, baccardi, weed, pepto bismol, vivarin, tums, tagamet hb, xanax, and valium in the same day. It makes it difficult to sleep at night." Eminem said. It is widely known that Eminem has experienced in many different drugs throughout his career. In 2007, Eminem suffered a huge setback when he nearly died after overdosing on methadone (as well-documented in his song “Arose” from his recent album Revival and “Deja Vu” from 2009’s Relapse).

It was his kids that inspired him and gave him the strength to triumph over his situation and successfully go through addiction recovery. He said that when he looked at his children, he realized that he needed to be present for them. Eminem got serious, worked with a rehab counselor and went through a difficult and painful detoxification. He says he was awake for three weeks straight, 24 hours a day, and had to learn how to perform fundamental tasks such as talking and walking, but also that he “could be naturally happy without being on something” and that “It does get better”.

Eminem was married to Kimberly Anne "Kim" Scott. She is Eminem's old high school friend. Eminem began on-and-off relationship with Kim 1898. The two had a daughter named Hailie Jade Scott in December 1995. The two were married in 1999 and divorced in 2001. Eminem and Kim briefly remarried in January 2006. They got divorced in early April. Eminem has custody of Hailie. He also has custody of Dawn's daughter Alaina and Whitney, Kim's daughter from another relationship. He had legal custody of his younger half-brother Nathan. 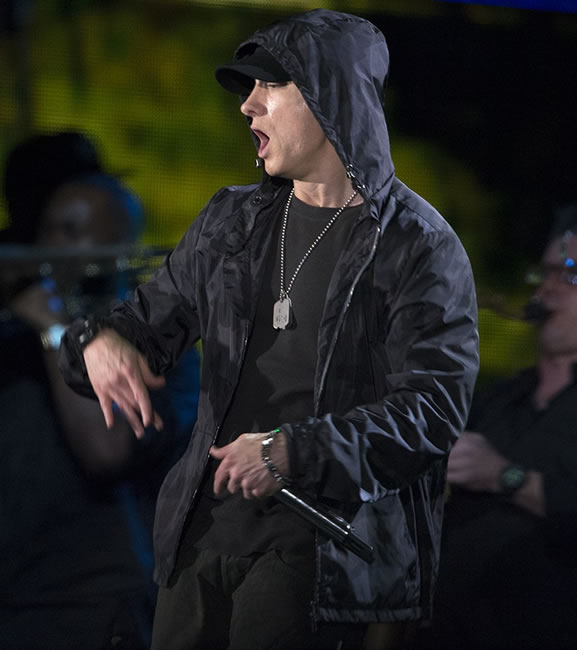 Eminem won the 2002 Academy Award for Best Original Song for his song Lose Yourself, co-written with Jeff Bass and Luis Resto. He is the first rapper ever to get an Academy Award.

Eminem has received fifteen Grammy Awards. "The Real Slim Shady" (from Eminem's second Grammy-winning album, The Marshall Mathers LP) criticizes the awards in its second verse. Eminem thought that his negative opinion on Grammy would prevent him from ever winning one. Eminem received the Global Icon Award at the 2013 MTV Europe Music Awards in Amsterdam.

Eminem was ranked ninth on MTV's Greatest MCs of All Time list. In 2003, he was thirteenth on MTV's 22 Greatest Voices in Music list and 82nd on Rolling Stone's Immortals list.